Freddy's Krueger has an album! 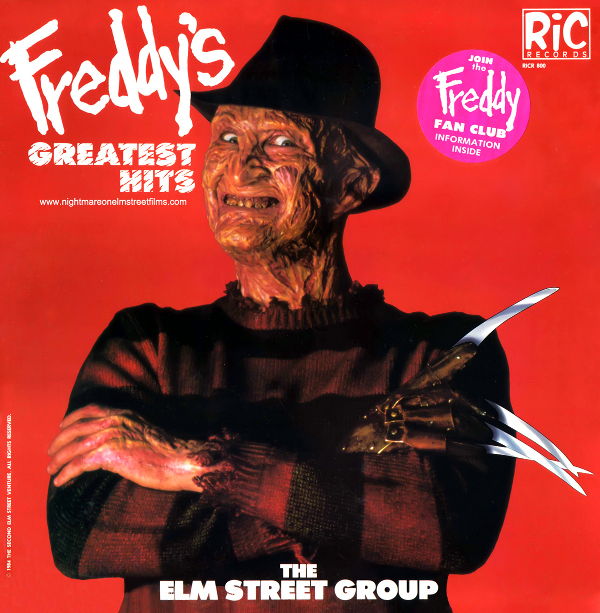 Most people who have known me for a long time could probably tell you that I have an unhealthy obsession with licensed novelty albums based on pop culture properties from the 80s and 90s. From Hulk Hogan's album to Teenage Mutant Ninja Turtles: Coming Out of Their Shells I have listened to and remember more about these songs than a lot of stuff that is played on the radio.

One of the most noteworthy albums in this mold is Freddy's Greatest Hits by the Elm Street Group. It's a bunch of songs performed primarily by a group of nameless female singers with Freddy himself carrying the back up vocals and acting as the Elm Street Group equivalent of Flava Flav.

The subject matter of the songs are what you would expect. Don't fall asleep, Freddy wants to get you, etc. The genres covered by the album cover a lot of ground, from more traditional pop music (of the time) to Bruce Springsteen knockoffs. There are a few songs that do try to go for a creepy vibe and are somewhat successful. The best song on the album is probably Don't Sleep. The first half of the song tries to go for a creepy, unsettling vibe, as if Freddy was nearby. The second half it turns into a barrage of guitar solos that sound like they came from Cinemax soft core porn from the 90s.

I would go as far to say that while this is pretty solid in terms of novelty albums, I do have some criticisms of the release. My biggest complaint is that there is nowhere near enough Freddy on the album. When you first put it on you are expecting a corn ball Freddy rap album, or at least an album where Freddy is on lead vocals. While what we have there is good, I just wish there was more. If Macho Man Randy Savage can rap an entire album, Freddy can carry a damn verse.

It's worth a listen if you're in the mood for some spooky tunez, or if you are just a diehard fan of covers of Wooly Bully.